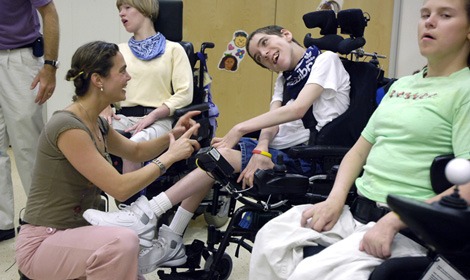 Among cases of cerebral palsy, the ataxic form is the least common. Cerebral palsy results from injury to the brain or spinal cord during pregnancy, birth or in very early childhood and can be a result of birth malpractice. When the cerebellum portion of the brain, which is responsible for balance and coordination, is damaged ataxic CP is often the result. People with this form of the condition have depth perception difficulties. They often have an unsteady walk, shaky hands and low muscle tone.


Approximately five to 10 percent of children who are diagnosed with cerebral palsy are categorized as having the ataxic form, making it the rarest. The movements of people with this condition are often described as being like that of an elderly person, in that they are shaky or tremulous. This trembling is particularly pronounced when attempting to grasp and use small objects, such a pen or buttons on a shirt. In an attempt to compensate for their unsteady balance and reduced coordination, those affected often take very wide steps. They may also have trouble with standing still. These challenges can be especially trying for affected children because it usually takes them longer than normal to complete particular tasks.
Muscle atrophy can be a concern for people with ataxic cerebral palsy because of the lack of use some muscles will get. Sometimes muscles may even become rigid, leading to bone deformity underneath. Fortunately the deformities tend to be less prevalent than they are for those affected by spastic forms of CP. In some cases malnutrition becomes an issue due to feeding difficulties and trouble with coordinating chewing and swallowing. Although some types of cerebral palsy are recognized soon after birth, ataxic tends to become noticeable a little later (often between 3 and 18 months of age).
As with any form of CP, treatment is very important. For ataxic cerebral palsy patients, physical therapy can improve balance, coordination and help keep muscles strong. Conductive therapy is also sometimes used. In this treatment, tasks are broken down into smaller steps and, in this way, are helpful to ataxic CP patients because they develop fine motor skills. This therapy is intensive, requiring more time than physical therapy. Medication may also be a treatment consideration, but is not as commonly used as in other forms of CP.
Cerebral palsy is a non-progressive condition, meaning that it will not worsen over time, but it can take a toll on a person’s body that will present additional challenges over time. The unfortunate truth is many cases of CP are the result of errors during prenatal care or labor and delivery. If your baby has brain damage that you feel resulted from a medical error, you should speak with a qualified birth injury lawyer. We regularly deal with birth injury cases and would be happy to provide you with a free assessment of your case.  Call the Rasansky Law Firm today at 1-877-405-4313 and speak with one of our highly trained Dallas birth injury attorneys.