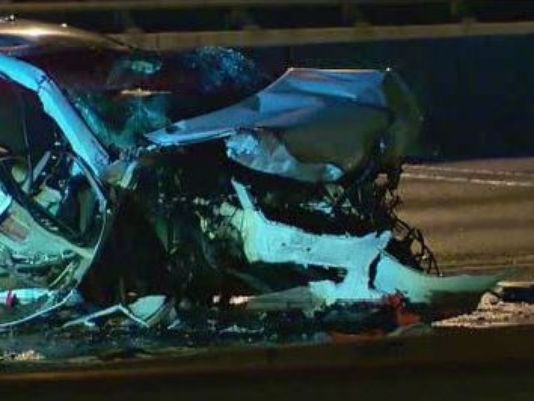 A fatal car accident in central Texas has once again drawn attention to the issue of drunk driving in our state.

According to Austin police, one man has died after his vehicle was struck by a wrong way driver on Interstate 35 in Austin, Texas on Wednesday morning.

Police are still working to figure out exactly what happened, however, they do believe that at around 2:30 a.m., a 23-year-old woman drove her car up an off ramp and travelled the opposite direction in the southbound lanes of I-35. The car was occupied by two women who police say were heading home after celebrating a birthday.

“Add up birthday celebration and wrong way driver and I can tell you there is a strong probability DWI will play a role in this situation,” said Austin Police Chief Art Acevedo.

The female driver struck the vehicle of a male driver—who was traveling in the correct direction—head-on near Airport Boulevard (where the highway splits into the upper and lower decks).

The man, whose name has not yet been released, died at the scene. The two women in the other vehicle were transported to University Medical Center Brackenridge in critical condition.

Chief Acevedo stated that consequences need to exist for everyone who plays a role in DWI crashes, starting with the people who cause them. “Life’s about choices,” he said, “everybody knows that drinking and driving absolutely do not mix.”

Acevedo went on to request that parents talk with their children about the dangers of not only drinking and driving, but also about getting in a car with a drunk driver. He encourages people to use ride-sharing companies in the city, take a cab, or ride the bus, and is also calling on juries to crack down on convicted drunk drivers.

“Someone runs over a pedestrian, probably under the influence at the time, and claims that it’s a deer that they thought they hit and they get probation. We have to hold people accountable, there has to be consequences,” said Acevedo. “It’s real easy to forgive somebody when it’s not your flesh and blood that has been laid out on a highway.”

Lastly, Acevedo touched on the subject of dram shop liability, saying that bars and restaurants that over-serve customers should also face punishment.

“To the bars that over-serve these young people, that serve these young people in the first place, you know I’ll be the first to say that I hope somehow you’re held, not just liable by TABC in terms of licensing, but I hope somehow you get help liable in terms of civil liability for not having responsible business practices. For caring more about the bar tab and how much we can sell then the lives that you’re going to impact when you let young people come in there and you over-serve them,” said Acevedo.

At Rasansky Law Firm, we wholeheartedly agree with Chief Acevedo. Alcohol serving establishments have the privilege, not the right, to serve alcohol. Along with this privilege comes responsibility. To get a license to serve alcohol, bars agree to certain specific rules laid out by the TABC. When a bar fails in their responsibility and someone is injured or killed as a result, Texas law says that the establishment may hold a portion of liability for the accident.

Our law firm handles drunk driving accident cases on a daily basis, and we will aggressively pursue any bar, club, restaurant, or other drinking establishment who’s overservice of alcohol leads to someone’s injury or death.

Drunk driving is a very serious problem in the state of Texas. In 2013, Texas lead the nation with 25,479 alcohol-related car accidents! Out of these accidents, 1,337 resulted in the loss of at least one life. This is absolutely unacceptable and we as citizens of this state need to step up and raise awareness of this deadly issue.

If you feel as strongly about drunk driving as we do at Rasansky Law Firm, we ask that you join us at this year’s Walk Like MADD event in Dallas on September 19th, 2015. Together, we can send the message that #DrunkDrivingEndsHere!