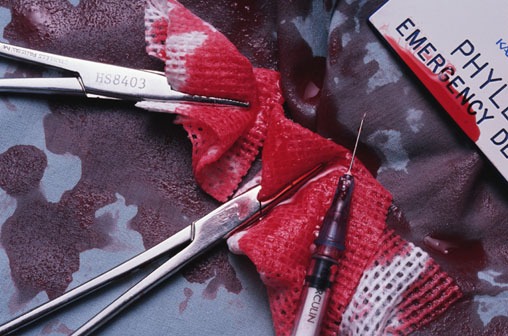 Did you know that under Texas law, a hospital has no legal responsibility to keep a dangerous doctor from operating?

UPDATE 02/15/2017: After four hours of deliberation, Christopher Duntsch—the surgeon discussed in this story—was found guilty of “injury to an elderly person” on Tuesday. He has been sentenced to life in prison.

UPDATE 07/22/2015: Duntsch has been arrested and charged with five counts of aggravated assault causing serious bodily injury and one count of injury to a child, elderly or disabled person. These charges are the result of prior surgical procedures performed by Duntsch.

Baylor Medical Center at Plano is well-respected as one of the top hospitals in North Texas, having received multiple awards for “Best Hospital” from U.S. News and World Report.

However, in 2012, Baylor Medical Center at Plano employed a surgeon named Christopher Duntsch who allegedly installed the spinal hardware incorrectly on one of his patients, Barry Morguloff. According to Morguloff, the surgeon left bone fragments in the nerves of Morguloff’s back, requiring another round of surgery to remove them. Morguloff will now walk with a cane for the rest of his life and is in constant pain.

Not an isolated incident.

That wasn’t the first alleged issue with Duntsch, however. Morguloff, along with Kenneth Fennell, Mary Efurd and Leroy Passmore, all alleged to have been injured by Duntsch. Passmore’s lawsuit states that when Duntsch operated on him, the surgery went so badly that the assisting surgeon grabbed Duntsch’s surgical instruments and tried to force him to stop. Morguloff also cites another patient which claims that Duntsch left him on the operating table while he went to Las Vegas.

It doesn’t end there with Duntsch. Morguloff also claims that Duntsch performed surgery on his best friend which resulted in him becoming a quadriplegic. The medical center suspended him for a month, but just after his suspension was lifted, Morguloff states that Duntsch performed another surgery where he nicked Kellie Martin’s vertebral artery. Martin died in the ICU.

Duntsch was let go from Baylor Medical Center, but the hospital did not indicate that there were any issues which led to his firing.

“As of this date, there have been no summary or administrative restrictions or suspensions of Dr. Duntsch’s Medical Staff membership or clinical privileges,” a letter from Baylor said. “All investigations with respect to any areas of concern … have been closed.”

Duntsch was able to get a job at Dallas Medical Center. More injuries occurred there, including the death of Floella Brown and Fennell and Efurd’s injuries.

Dr. Robert Henderson was called in when Duntsch allegedly incorrectly inserted a screw into Efurd’s spine, pinching her nerve. Henderson tried to perform rescue surgery and saw a mess of mistakes.

“It was horrible,” Henderson said later. “I was speechless, as I still am most of the time, when I think about it. I mean, it was horrible.”

Henderson reported Duntsch to the Texas Medical Board, but they did not act on that complaint until 11 months later. In the meantime, Duntsch lasted only a week at Dallas Medical Center. He then worked at University General Hospital in Oak Cliff. There, a surgeon named Dr. Randall Kirby, who had encountered Duntsch when he was in Plano, expressed his concerns about Duntsch to the president of the hospital. The president then checked with Baylor Medical Center and Dallas Medical Center to see if they had any information on Duntsch. Predictably, they did not, so the president credentialed Duntsch.

Duntsch then allegedly botched another surgery where he improperly performed an incision, left a sponge inside the patient, and left the patient to die, without a plan of action, according to Kirby. He also reported Duntsch to the Texas Medical Board.

Finally, eleven months after Henderson’s initial complaint the Texas Medical Board suspended Duntsch. On June 26, 2013, the board ordered a temporary suspension of Duntsch’s license.

The board order cited his treatment of four patients—Summers, Martin, Brown and Glidewell—in finding that Duntsch represented “an imminent peril to the public health.” The board also found that Duntsch was “unable to practice medicine with reasonable skill and safety due to impairment from drugs or alcohol.”

Duntsch is not the only Dallas physician who’s had his license suspended. In fact, just yesterday the Texas Medical Board temporarily suspended the license of another physician, and the Board will meet on June 12th to consider revoking the licensure of an additional Texas physician.

What can victims do?

The problem that these victims face is that Texas law makes it very difficult to sue a hospital for improper credentialing of a physician, due to tort reform measures instituted in the 90s and again in 2003.

The Texas Supreme Court has ruled that all credentialing information related to doctors was to be kept confidential. Usually, these documents can show due diligence—or lack thereof—on the part of the hospital in investigating a doctor’s past.

How can you prove malice?

The tricky thing about proving malice on the part of hospital administrators is that most times, plaintiffs will need to view the documents related the credentialing process in order to do so. But that information was now confidential, which meant hospitals were essentially free from any suits relating to improper credentialing.

Plaintiffs could still sue a hospital for gross negligence—which means they knew a certain activity or person is dangerous yet allowed them to continue—but that avenue was closed in 2003 by Texas legislators. A tort reform act redefined the “malice” standard in a way that made it almost impossible to prove. Plaintiffs would have to prove that the hospital had given a dangerous doctor a credential in order to hurt them, which is a situation that rarely (if ever) happens and is virtually impossible to prove.

The only way to change this situation is to challenge the constitutionality of the ridiculous tort reform laws enacted by the state legislators. The plaintiffs in the Morguloff suit are attempting to do so, but there is long road ahead.

In March of 2014, then-Texas attorney general (now governor) Greg Abbott requested permission to defend Baylor Medical Center against Morguloff’s lawsuit, which shows the mountain that Morguloff and others have to climb in order to change the laws in Texas.

This data shows that plaintiffs just don’t bother with lawsuits relating to hospital credentials. This leads to dangerous situations, like the one with Duntsch, where hospitals are more likely to credential questionable doctors because they realize they likely will get away clean if a doctor messes up.