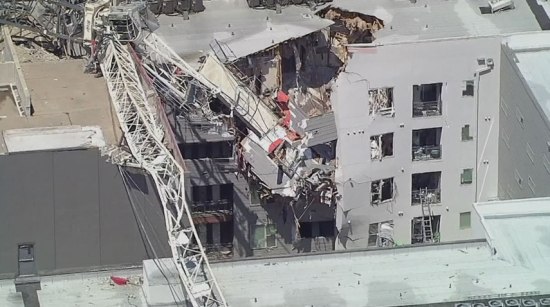 A woman was killed Sunday afternoon when a crane collapsed onto Elan City Lights apartment complex in Downtown Dallas when severe weather hit the Dallas/Fort Worth area. The National Weather Service reported the DFW area and surrounding cities were under a severe thunderstorm watch Sunday with heavy winds and large hail hitting certain parts of the area.

Six people were taken to local area hospitals with two of those people in critical condition. Two people were seriously injured and one person was already released from the hospital with minor injuries.

Officials said crews had searched and cleared all units that were accessible and found no additional victims inside. Fire rescue spokesman, Jason Evans, told The Associated Press late Sunday that residents living in apartments that are inaccessible, because of damage from the crane, were either out when the crane collapsed or among those who were hospitalized.

Dallas Fire and Rescue said in a statement earlier Sunday,“Multiple resources, to include Fire Operations, Emergency Medical Services, Urban Search and Rescue and Hazardous Materials assets, have been dispatched to the scene to help mitigate the situation.”.

Dallas officials have said the property managers of Elan City Lights apartment complex will leave the building evacuated and have already set up living accommodations for the residents.

Views from Chopper 11 CBS DFW showed the incredible extent of the damage caused by the crane collapse with damage to the complex and vehicles below.

The DFW Scanner, a breaking news blog devoted to informing North Texas and Dallas community of emergencies and public safety incidents, posted a photo of the damage to their Twitter account.

There were no other reports of injuries in the areas that suffered from the storm damage.

Speak With a Dallas Crane Accident Lawyer For Free