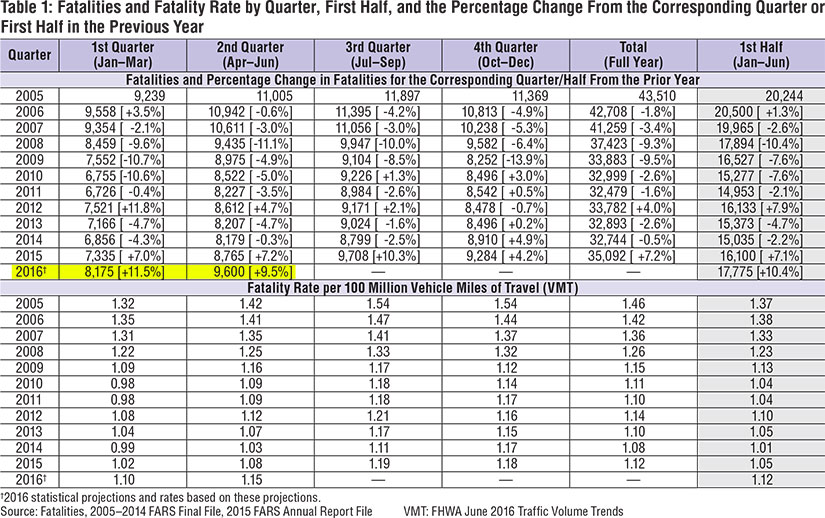 When compared to the first six months of last year, the number of fatal car accidents in 2016 has spiked by 10%.

A 2016 report from NHTSA (The National Highway Traffic Safety Administration) revealed a marked increase in car accident deaths during the first six months of 2016, compared to the same period in 2015.

According to the report, a total of 17,775 people died in traffic-related accidents during the first half of 2016. This represents an increase of 10.4 percent over the same period last year (about 1,500 additional traffic deaths), and is the largest spike in traffic deaths in the last 50 years.

According to the NHTSA report, a total of 8,175 fatalities occurred during the first quarter of 2016 and 9,600 in the second quarter. These numbers represent increases of 11.5 percent and 9.5 percent respectively, when compared with the same periods in 2015. It’s projected that 2016 might see over 35,000 traffic fatalities for the year; a number we haven’t reached since 2008.

Is technology the solution?

Even though there is no clear information regarding what may be causing fatal accident rates to increase, we do know that human error is by far the number-one cause of car wrecks.

In spite of the fact that distracted driving accounts for an estimated 25 percent of all traffic fatalities (according to the NSC), some states—like Texas—have no statewide laws banning texting and driving. While I fully-understand that making the practice illegal will not solve the problem overnight, the same could be (and was) said about seat belts in the 1060s. We all know texting and driving is a serious problem, but unless we take steps to address the issue, the problem will only continue to get worse.

While the implementation of stricter laws on drunk driving and safer lanes for bikes provide solutions to many traffic-safety issues, there is also a need for continuing the development of self-driving cars; a newer technology that seeks to eliminate human error as a cause for traffic accidents. While the prospect of computer-driven automobiles is alarming to many, you must also realize that about 90 percent of all car crashes are caused (at least in part) by human error.