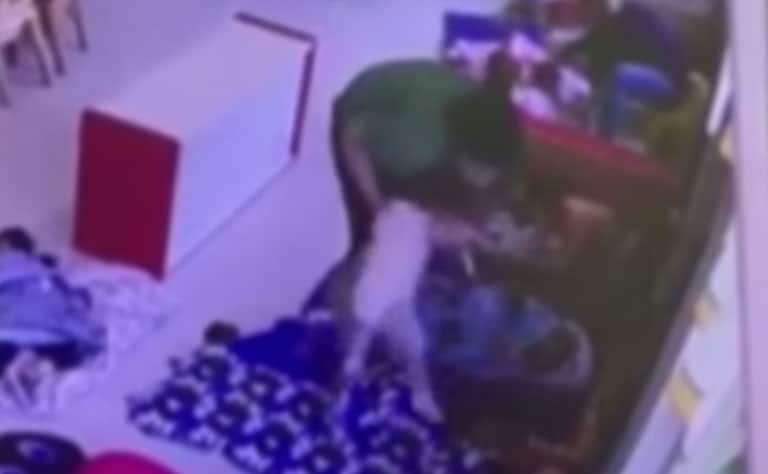 ﻿PLANO, TX — Police have arrested 22-year-old Jazmine Torres, a daycare worker who was seen on video pushing a toddler to the floor this past Friday.

According to the Facebook post which first published the video, the child’s mother, Caitlin Gilmore, was observing the childcare facility’s live feed during her lunch break on Friday when she saw an employee of the daycare roughly lay her 18-month-old child down for a nap.

Upon seeing her child being abused at daycare, Gilmore left work to retrieve her son immediately. While what she initially saw was not recorded, friends in her office continued watching and luckily recorded the part of the live stream.

The video (which has been viewed over 800,000 times on Facebook alone) shows 22-year-old Jazmine Torres—an employee of Children’s Courtyard in Plano, TX—pushing a young child to the floor. Just moments later, Torres picks up the same child and drops him face-first onto a rubber nap mat.

Also concerning is the fact that another employee in the back of the shot doesn’t appear to be handling the children much better. The second worker appears to flip one child over by pulling her arm, and also appears to pull another toddler by the leg. Gilmore’s son was taken to Children’s Health hospital in Dallas for an evaluation. Luckily, doctors say the child is okay.

“Any parent out there, it’s going to be something that’s just horrific,” said Plano police spokesman officer David Tilley. “But any human being to see a toddler treated that way is just, that’s just unacceptable.”

Torres turned herself in today and now faces one charge of endangering a child, a state jail felony which carries a penalty of 180 days to two years in jail and a fine of up to $10,000. Her bond has been set at $10,000. Police have not said if more charges will be filed.

“We have strict policies and procedures to ensure the safety and well-being of our children, and to make certain we meet or exceed state guidelines. We don’t tolerate deviation from those standards. Upon being made aware of this situation, we immediately notified the authorities and partnered with the state as well as conducted our own investigation. Those involved are no longer employed with us. We will continue to work closely with licensing and reiterate our training processes with all staff. We take our responsibility seriously, and are committed to ensuring our children receive high quality early education and nurturing care.”

A history of violations.

The Texas Department of Family and Protective Services (DFPS) has seen 29 violations at this facility in the past two years alone. Nine of these violations were considered “high risk level” and serious enough to put children at risk.

On Monday morning, CW33 NewsFix showed the video to one father outside the daycare who said he knew nothing about it. While reviewing the video footage, CW33 says he noticed his son asleep just steps away from where the incident took place, and went straight back inside for answers.