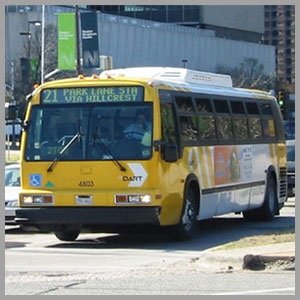 Thanks to a new report by NBC 5 Investigates, it’s now coming to light that five DART bus drivers (who had collectively racked up almost 1000 complaints in 2 years) were still on the job and behind the wheel. That is, until NBC started asking questions.
Nine months later, DART says it has fired two of the drivers and suspended a third. Vice president of transportation for DART Timothy W. Newby says “Ninety-nine percent of the trips we provide, there is no problem.” DART also contends that customer complaints are actually down 18% over the last two years.

In one case, NBC counted more than 200 complaints in one driver’s file. However, DART considers that driver to have only 30 complaints…
DART argues that the agency does not count every complaint it receives against a driver’s record, so the true number of complaints is actually lower than it appears. It turns out though that DART does not count complaints filed by customers who don’t want to leave their name, and they only count complaints where they are absolutely certain the driver was responsible for the incident.
Some of the complaints were for:

“Every time we have a complaint we are bringing in that particular employee to speak with them about that issue,” said Newby. “We have fired individuals for complaint activity and we will continue to do that.”
One complainant summed it up nicely: “I’ve worked in the restaurant industry a long time and you get three write-ups, basically, and that’s it, you lose your job.”