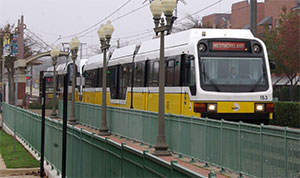 Car vs. train accidents in Dallas are certainly a somewhat uncommon occurrence, but how do they still happen in 2014? Why has DART been involved in so many accidents in the past year?


A Saturday morning (03/01/2014) accident involving a car and DART train resulted in the death of the car’s driver. The accident occurred when a Green Line train hit a vehicle at a train crossing. Four passengers on the train were also injured in the Saturday morning accident.

The accident was reported just before 9 a.m. and occurred just south of Fair Park close to the intersection of Robert B. Cullum Boulevard and Seyene Road. According to reports of the accident, the train hit the driver’s side of the car and killed the driver, a female believed to be in her 20s. There was no one else in the car. Morgan Lyons, a spokesperson for DART, said the accident happened as a result of the vehicle entering the railroad crossing as the crossing arms were coming down. Under ordinary circumstances, the lights and bells will sound approximately twenty seconds before the crossing arms begin to come down.
Out of a total of 24 people on the train, four reported injuries. The accident is currently still under investigation.

There have been several personal injury accidents involving DART within the last year. One report that NBC 5 investigated uncovered information that showed five DART bus drivers who had nearly 1000 complaints between them in just two years, were still driving—at least until NBC began making some inquiries. Since that time DART fired at least two of those drivers and suspended a third one.
Some of the common complaints reported to DART included:

Following an accident in which a Dallas Area Rapid Transit (DART) bus slammed into two cars that were stopped at a toll, one of the victims in the accident filed a lawsuit against the driver of the bus and a contractor who was working with DART at the time the accident occurred.
The car accident occurred when the bus driver, Willie Grant, failed to slow for traffic as he approached the Oak Lawn exit lane. The bus hit one car pushing it into another car and seriously injuring two people. The North Texas Tollway Authority operated a camera that showed the driver was not asleep or distracted but shows the cause of the accident was likely simple inattention.
There have also been several DART train accidents. Just search Google for “tre accident dallas,” and you’ll see what I mean.
If you have been injured by a DART bus or train, contact our office through via our online email form or call us at 1-877-405-4313 to arrange a consultation with one of our personal injury attorneys.