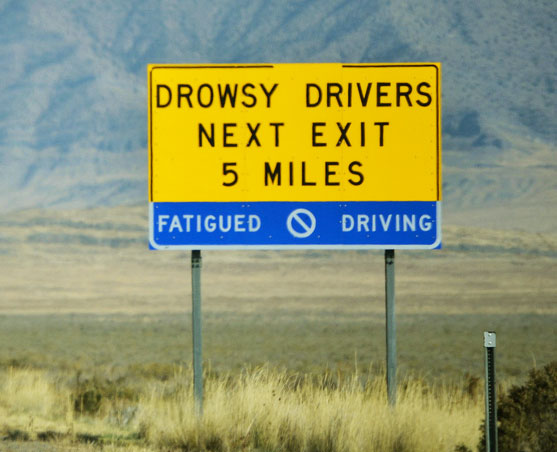 Those who choose to drive when they are sleepy or fatigued place the lives of many people in jeopardy, including their own. The statistics are alarming and continue to increase every year.

﻿While official government statistics tend to suggest that drowsy driving is only a factor in approximately 1-3 percent of motor vehicle accidents each year, the results of several in-depth studies report the true figure to be much higher. One such study that was conducted by the AAA Foundation for Traffic Safety, and showed that between 1999 and 2008, drowsy driving was a factor in:
﻿

The dangers of driving while drowsy.

Those who choose to drive when they are tired are taking a huge chance with their lives, and with the lives of other motorists. Although the majority of people are aware of the dangers of drinking and driving, they don’t consider the fact that driving while drowsy can be just as bad. Sleepiness acts like alcohol in that it slows the reaction time, impairs the judgment, decreases the sense of awareness, and increases the potential of having an accident.

It can be next to impossible to assess (with any degree of certainty) whether drowsiness was a factor in a fatal crash., but there are a number of clues investigators may find at the scene of a crash that can provide enough information to show whether a driver fell asleep at the wheel. For instance, accidents that are the result of drowsiness usually involve only one vehicle, and the driver is usually by himself or herself. Also, there are not usually any skid marks or other signs the driver tried to avoid the crash.

There are many factors that can contribute to drowsiness, including the following:

Truck drivers are a big problem when it comes to falling asleep while driving because of the tight schedules they keep, their extended hours of service, and often-unrealistic delivery schedules to which they often must adhere. While all car accidents are serious, crashes involving 18-wheeler trucks often prove deadly simply due to their sheer size and weight.

Our firm is here to help both drivers and passengers who have been injured in car accidents, and our job is to make sure you’re fairly compensated for 100 percent of your damages. There is no out-of-pocket cost to hire us, and we only collect a fee if we win your case and you get paid. Fill out the contact form on this page or call our office at 1-877-405-4313 to speak to one of our experienced personal injury lawyers about your case today.