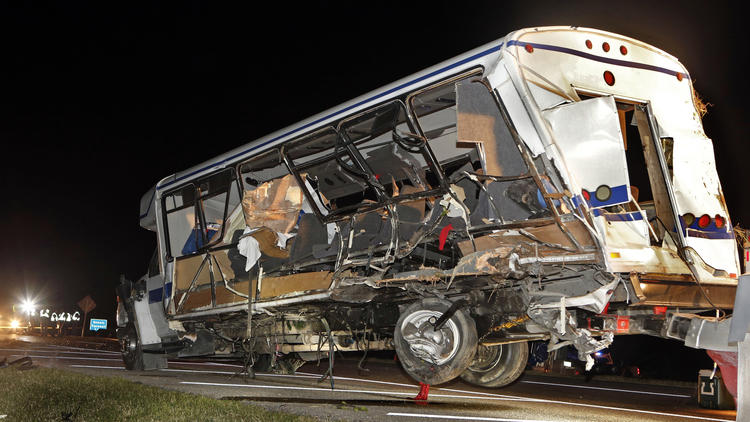 
The victims of this accident were all members of the North Central Texas College women’s softball team. The team was heading back to their college campus located in Gainesville, Texas following a scrimmage against Southern Nazarene University, in Bethany, Oklahoma. The NCTC-owned Champion Motor Coach bus was carrying 15 players and was driven by the team’s coach, 48-year-old Van Hedrick.
The bus accident, which occurred near the Oklahoma-Texas border (between the Oklahoma towns of Davis and Ardmore), was caused by the driver of an 18-wheeler which crossed a highway median into oncoming traffic and struck the southbound bus just after 9:00 p.m.
Three students were pronounced dead at the scene of the accident. A fourth was pronounced dead at a hospital in Sulphur, Oklahoma. The victims, who were all from small North Texas towns near the campus, have been identified as:


At least eleven ambulances and several helicopters responded to the scene to assist with those injured. The team coach as well as eight students were treated and released, while three other students were hospitalized at Norman Regional Hospital and/or Mercy Hospital in Ardmore. 18-year-old Bailey Buchanan was listed in critical condition Saturday, but was upgraded to stable condition Sunday. 19-year-old Rachel Hitt was also listed in fair condition.
According to officials, the accident occurred after the semi-truck continued straight as Interstate 35 made a gentle curve to the right. Investigators estimate that truck traveled 820 feet through a median (at a shallow angle) before striking the bus. After the collision, the truck continued another 300 feet across the southbound lanes and barrelled through some trees further off the roadway. According to Oklahoma Highway Patrol Capt. Ronnie Hampton, it took highway patrol an hour to even find the 18-wheeler.
National Transportation Safety Board (NTSB) investigators arrived at the scene Saturday to conduct an investigation. Both drivers will undergo standard toxicology tests, and the Oklahoma Highway Patrol (who is conducting a separate criminal investigation) says that they are treating the accident as if it were a homicide.
The driver of the 18-wheeler has been identified as 53-year-old Russell Staley of Saginaw, Texas. Staley, who was driving for Quickway Transportation, was treated at a hospital and released. According to Oklahoma Highway Patrol, Staley told investigators he was “distracted by something in the cabin.” While no charges are currently pending against Mr. Staley, investigators do not necessarily agree with his explanation, and intend to perform an in-depth investigation. The NTSB has already declared that investigators found “no evidence of braking or evasive maneuvers” by the tractor trailer, that there were no anomalies with the brakes on the truck, and that the weather was clear and the highway dry at the time of the crash.
UPDATE 10/10/2014: Police inventory shows that a silver marijuana pipe and a bag of prescription drugs were found in Mr. Staley’s truck cab.