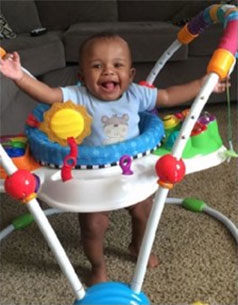 LEWISVILLE, TX (02/05/2016) — Police and the Texas Department of Family and Protective Services are investigating an unlicensed home daycare following the death of 10-month-old Kayden Bolden.

UPDATE 02/18/2016: The daycare’s owner, 60-year-old Druscilla Bowie, has been arrested and charged with a misdemeanor for “operating a child care facility without a license.”

According to reports, Latoya King dropped off 10-month old Kayden Bolden at the home-based day care on Friday morning at around 10:30 a.m. At 1:30 p.m., she called to check on him and was told he was napping. When she came to pick him up shortly before 5:00 p.m., she reported that Kayden was “lifeless.”

After being rushed to a local hospital, Kayden King-Bolden was pronounced deceased.

While police say there was no initial evidence of foul play, Kayden’s parents want a thorough investigation into what led to the infant’s death. After all, the lack of foul play does not mean the lack of negligence.

According to one report, the day care provider/babysitter (Druscilla Bowie) sent a text-message to the parents on Saturday saying “Please don’t hate me. I would never do anything to hurt him, I tried to make him as comfortable as I could because he had been crying.”

It was reported that the home daycare in question does not have a childcare license; in fact, Bowie’s child care permit was revoked in 2008. Today, the Texas Department of Family and Protective Services (DFPS) announced that they are investigating the home as an illegal childcare operation. This investigation could take up to 30 days.