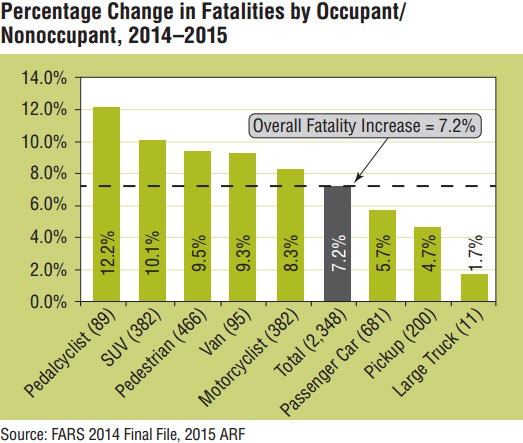 A recent report by the NHTSA indicates that the number of motorcycle fatalities is on an unfortunate upward trend.

Even though motorcyclists accounted for less than 1% of total miles driven, they accounted for a staggering 14% of all traffic deaths in 2015.

According to the NHTSA (National Highway Traffic Safety Administration) there were a total of 35,092 people killed on U.S. roads in 2015. This is a 7.2% increase over 2014, and the single largest percentage increase in traffic fatalities in nearly five decades (when fatalities rose 8.1% from 1965 to 1966). The data from NHTSA showed a rise in traffic deaths in almost all segments, including passenger car crashes, auto-pedestrian accidents, motorcycle wrecks, and drunk driving accidents. 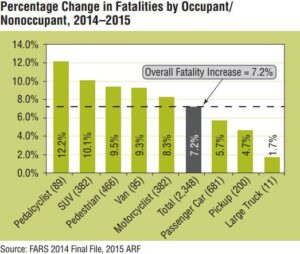 A total of 4,976 people died in motorcycle accidents in 2015; an increase of eight percent compared to 2014. The reasons the NHTSA provided for the 2015 increase in deaths of motorcyclists included speed, lack of equipment, and error on the part of other drivers.

The NHTSA also reported that job growth and lower fuel prices were contributory factors that encouraged people to spend more time on the roads in 2015 (2015 saw the largest increase in miles driven in almost 25 years). When there are more drivers on the road, there are simply more chances for fatal accidents to occur.

The data compiled by NHTSA shows that more people die on the roads when they are distracted, driving drunk, drowsy, speeding, or do not wear their seat belts. According to the NHTSA administrator, there have been substantial improvements in many of those areas, but there is a need to find new solutions in order to put an end to traffic fatalities. Unbelievably, Texas WAS one of the last remaining states not to pass a law banning texting while driving, until they did so in September of 2017.

Helmet use could save over 1,800 lives per year.

According to the Center for Disease Control (CDC), the use of motorcycle helmets reduces the risk of injury by 69 percent, and death by 37 percent.  The CDC says that a universal helmet law is the most-effective method for saving lives and money, and could have saved $1.1 billion in 2013 if every motorcycle rider had chosen to wear a helmet.

A recent study on national highway safety discovered mandatory helmet laws are the only method that can put an end to the sharp increase in motorcyclist fatalities; however, a total of 32 states (including Texas) leave the decision up to the riders. In 2012, Michigan repealed its helmet law (for the second time). Immediately after the law was repealed, doctors in emergency rooms noticed a sudden increase in serious head injuries from motorcycle crashes. The increase led to a three-year study which indicated that–among riders who died at the crash scene–the percentage of victims wearing a helmet dropped from 14% to a staggering 68%.

Texas used to require all riders to wear a helmet, but the law was repealed in September of 1997. That same month, there was a “sudden upward trend” in motorcycle fatalities in the state. One study even showed that a few years later, the number of motorcycle deaths had increased by 30%.