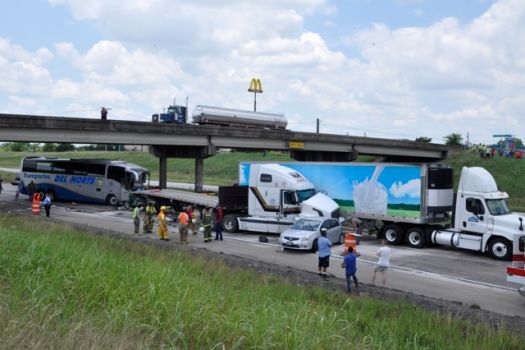 WEIMAR, TX (06/03/2015) — 31-year-old Miguel Angel Tobalina-Gonzalez and 34-year-old Roman Juan Domicilio were killed, and 10 others were injured in a commercial bus crash on Wednesday afternoon on I-10 in Weimar, Texas.

According to the Texas Department of Public Safety, a Transportes del Norte commercial bus—owned by Grupo Senda—crashed and killed Miguel Angel Tobalina-Gonzalez, 31, and Roman Juan Domicilio, 34; ten others were injured in the wreck.

The bus accident was reported to have occurred around 12:30 p.m. on Interstate 10 in Weimar, Texas—a town about 85 miles west of Houston. The Mexican-based bus company was transporting passengers from Laredo, Texas to North Carolina.

The DPS stated that the driver the commercial bus, Tobalina-Gonzalez, failed to pay attention when traffic slowed down in a construction zone. The bus rear-ended a flatbed truck, causing the 18-wheeler to then hit a Cadillac SUV.

According to Sgt. William Kennard, Miguel Angel Tobalina-Gonzalez was killed in the crash, and Roman Juan Domicilio, a bus passenger, was ejected and also died.

Kennard stated that all injured passengers aboard the bus were taken to nearby area hospitals for treatment.

The Cadillac SUV involved in the wreckage was crushed, however, the driver, Susan James, was not injured in the crash.

“When I first got hit, I ducked, put my hands over my head and stayed down,” said James, “and I was getting bumped around so I’m sure I was being thrown around the car because it ended up under the flatbed of the truck that hit me.”