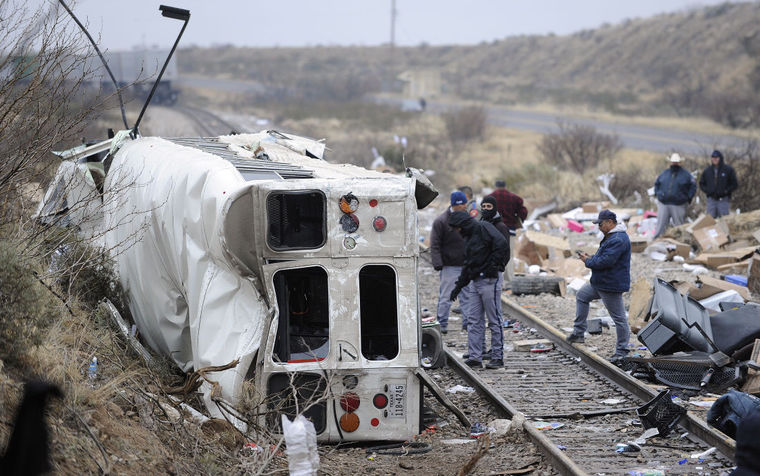 PENWELL, TX (01/14/2015) — Ten people have been died, and five have been seriously injured in what is being described as the deadliest crash in the history of the Texas Department of Criminal Justice.


A violent TDC prison bus accident has claimed the lives of officers Christopher Davis and Eligio Garcia, as well as inmates Michael Stewart, Angel Vasquez, Jeremiah Rodriguez, Jesus Reyna, Kaleb Wise, Adolfo Ruiz, Byron Wilson, and Tyler Townsend. The accident also left five others seriously injured.
On Wednesday morning at around 7:30 a.m., a Texas Department of Criminal Justice prison bus traveling on Interstate 20 careened off the roadway, down an embankment, and collided with a passing Union Pacific freight train. The white TDCJ bus came to rest on its side, with heavy damage to its roof and undercarriage.
The accident, which occurred in the West Texas town of Penwell (just west of Odessa), occurred during a prisoner transport where 12 minimum security inmates (reportedly serving time for offenses such as theft, drug possession, fraud and aggravated assault) were being taken from the Middleton prison in Abilene to the Sanchez prison in El Paso. The bus was also carrying three correctional officers.
According to one DPS trooper who witnessed the accident, it “appeared he had lost control of the bus. He had hit one of the guard rails, came off the roadway, and flew across the embankment, onto the UPS cargo.” The trooper was working another crash nearby at the time of the accident. “It’s as bad as you can imagine. In 32 years, it’s as bad as anything I’ve seen,” said Odessa Fire & Rescue Battalion Chief Kavin Tinney.

Victims of the accident.

Eight inmates and two correctional officers were killed in the bus accident. They were identified as:

One correctional officer and four inmates were also injured in the crash. They’ve been identified as:

The two deceased correctional officers each had more than 15 years’ experience with the Department of Criminal Justice. Officer Jason Self was listed in critical condition at University Medical Center in Lubbock as of Thursday, January 15th. The four injured inmates are being treated for critical and serious injuries at Medical Center Hospital in Odessa.
The prisoners were handcuffed in pairs, and were not wearing seat belts or leg restraints. Only the driver’s seat was actually equipped with a seatbelt. According to reports, a few of the victims were actually ejected from the bus after it struck the moving train.
No one aboard the 58-car freight train, which was traveling from the Los Angeles area to Marion, AR, was injured. Two container cars at the rear of the train were heavily damaged in the collision.

Cause of the accident.

According to Texas Department of Public Safety spokeswoman Sgt. Elizabeth Barney, “While the wreck is still under investigation, weather conditions are being considered as a contributing factor.” Investigators believe there may have been ice on the roadway at the time of the accident. Police also say that an earlier accident near the same spot of I-20 may have also contributed to the bus crash.
The National Transportation Safety Board (NTSB) has said they will send a team of investigators to the scene of the accident to perform a full investigation.