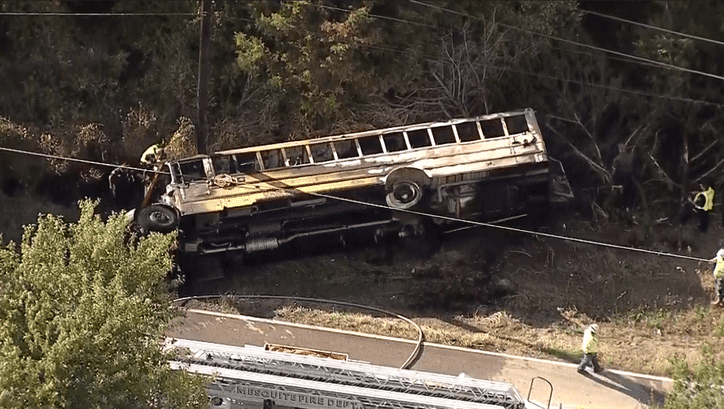 Wednesday afternoon, just before 4 p. m., a Mesquite ISD school bus was transporting 42 students from Terry Middle School when police said the bus rolled into a ditch, struck a powerline, and caught fire.

According to the accident report, John Johnson, 67, was driving the bus near the corner of Lawson and Cartwright when, for an unknown reason, the rear wheels slid off the pavement Johnson over-corrected, pulling the bus to the left into oncoming traffic. To avoid oncoming traffic, johnson turned the bus back to the left where it hit a ditch and rolled onto its side, continued to slide, and hit an electric pole. A broken powerline from that pole landed on the bus causing it to catch fire.

The bus had rolled onto its right side blocking the main door however, the rear emergency door and roof hatch were accessible where bystanders and first responders worked to get all the students out of the bus. Tragically, one student was trapped and, though they tried, rescuers were unable to save her.

Three other students, three police officers, and the bus driver were taken to the hospital where they were treated for minor injuries. The rest of the children were taken back to the school, were treated by the nurse, and released to their families.

Students on the bus recounted what happened:

“[The bus] slammed into an electric pole and started getting smoky and fiery,” sixth-grader Ramona Mitchell told NBC5. “She said a student she didn’t know rescued her.” “I couldn’t do it, so like a stranger I didn’t know, a girl, helped me unbuckle and then I ran out to safety,”.

“The bus started swerving left and right and then it fell over,” Sergio Conaway said.

Mesquite ISD stated, “We know these citizens saved many lives tonight, and we are deeply moved by and thankful for their heroic acts,”.

“It is with a very heavy heart that we must confirm that today, we lost one student,”.

The district also stated that staff and counselors comforted students as they arrived at school today and that they will be on hand to help anyone in need for the rest of the week.

Terry Middle School staff and students as well as those at Norn High School wore blue today in honor of the student who was killed.

A nearby resident stated that the road at that location has been a problem for years. According to the Texas Department of transportation, 68 wrecks have been reported there since 2010.

A go fund me has been set up to help Jazmine’s family cover final expenses.